Following a postal ballot of eligible businesses that ended last Thursday, 26th April, it was announced on Friday at Penrith Town Hall that the result was in favour of establishing a BID for Penrith’s industrial estates.

For a BID to be successful two threshold tests have to be met in the ballot:

2. The positive vote must represent more than 50% of the Rateable Value (RV) of the votes cast.

The total number of votes cast, excluding rejected ballot papers, was 74 representing a rateable value of £1,814,675.

The votes in favour were 57, representing £1,526,825 RV and therefore meeting both threshold tests

A spokesperson for the development group, who are behind the BID proposal said:  ‘We are all highly delighted that estate businesses have endorsed the BID and the strong business plan which accompanied it. We now need to look forward to October when the BID is due to start and by which time a BID board will be in place’.

From the Chairman:  “As Chairman I was delighted that businesses voted in favour of the Penrith Industrial BID. The support from local businesses has been very positive and the next five years will be a very exciting time for everyone. We look forward to the formation of the board that will oversee a number of key projects and initiatives to benefit all of our businesses and foster a positive, prosperous and sustainable future for our existing industrial estates”

The BID aims to unite more than 150 firms on the town's Gilwilly Industrial Estate, Eden Business Park and Penrith Industrial Estate and give them a stronger voice. It also aims to improve the image of the estates, with projects including new branding, landscaping and litter picking, looking at crime prevention measures, such as CCTV, improving access and pest control.

Interestingly the Penrith Industrial Estates BID has been declared by *British BID’s as the 300th BID in the UK. In addition Penrith is the first place the country to have two BID’s in the same town.

*British BID’s is the highly respected and long established organisation focused entirely on Business Improvement Districts (BIDs). Through the delivery of advice, training, products and services, it delivers quality and innovation to the rapidly growing UK BIDs industry.

The first BID was established in England in 2005 and, since their creation, have gained widespread national attention across the country.

A BID is a business-led organisation aimed at improving a commercially defined area. Businesses within that area take part in a formal ballot which determines whether a BID is implemented in that area, and whether money can be spent.

There are varying types of BIDs across the UK and Ireland that deliver a number of regeneration plans, ranging from town centre through to commercial BIDs. 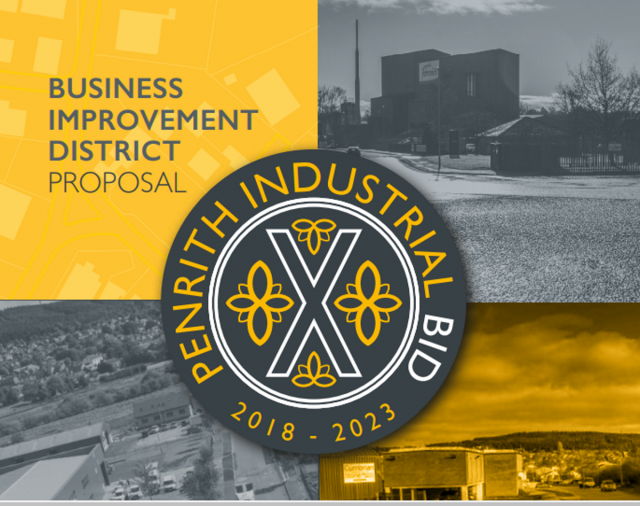