Penrith Chamber of Trade and Commerce have announced plans for an event to take place throughout Eden this winter.

Running between 1st December and 28th February, ‘Penrith and Eden Window Wanderland’ will see towns and villages across the district light up windows with colourful displays to brighten up the dark winter nights.

Having seen this done successfully in other parts of the country, Chamber President Stephen Macaulay thought it would be a perfect way to see us through the winter and give our towns and villages the opportunity to get creative and ‘shine a light’ on the district, ‘The idea was discussed at a recent meeting of the Executive Committee and it was agreed that the Chamber would pay to get the event registered for our area’. Shortly after, however, Stephen heard that Eden Valley Artistic Network had been thinking along the same lines ‘it came to light during a Penrith Working Group Meeting that Simon Whalley of EVAN had put in a funding request to Penrith Town Council to employ a local artist to organise a similar local event in Penrith. When we heard this, we got in contact with him to discuss how we could collaborate and run the event district wide.’

Since then, a growing number of local organisations have joined in and support continues to grow. ‘We now have various organisations on board with local groups/ representatives in Appleby, Kirkby Stephen and Alston Moor but we’d like to see other towns and villages getting involved’.

EVAN have received funding from Penrith Town Council and Eden District Council to support efforts in both Penrith and Eden Valley and this will allow local community artist, Gwen Bainbridge, to support the event and work with local contacts to develop local interest throughout the district. Further local funding is anticipated from the towns as the event gathers pace.

‘We’d like to see as much community involvement as possible and would ask interested parties to get in touch to find out how to get started by emailing [email protected].

So far, the following organisations have expressed interest and are taking part in discussions:

Penrith Chamber of Trade and Commerce

A steering group has been established to work on the project with more announcements to follow. 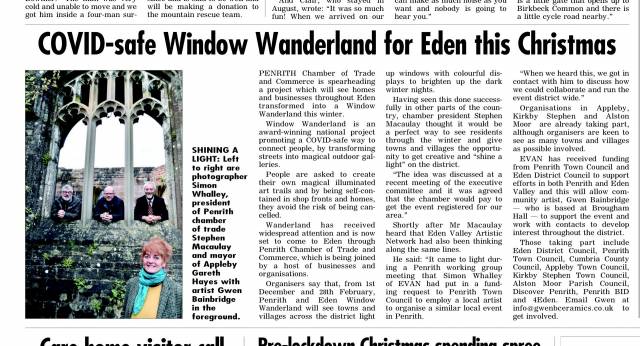